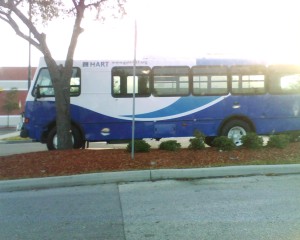 If you hadn’t noticed already, several new buses have been running on the HART system during the past week. Well, they’re not really brand new. In fact, by the picture above, they look like an older model. However, they sport HART’s new livery. So what’s the story behind these buses?

Well, after talking to a HART staffer, it seems that these buses will serve as a temporary contingency fleet for the agency while the fleet of Gillig buses are repainted in the new colors. Since these buses are so small (my guess is that they are only 25 feet in length), they will be used on lower frequency routes (like Routes 10 and 31) and connector routes (83, 87, 88, and 89) as substitutes while the Gilligs are repainted.

This may very well be the reason why the bus repainting has been going so slowly. My guess is that HART is repainting the 30ft Gilligs first, allowing them to use the substitute buses as needed. Then they may move on to the larger buses as time goes on.

Blogging about public transportation in Florida & beyond. View more posts