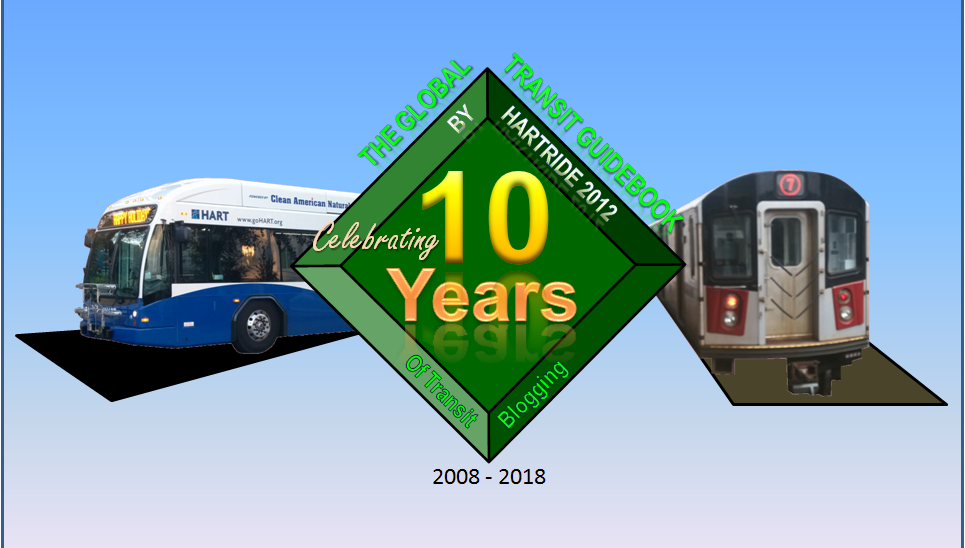 Can you believe that it’s been 10 years since I began blogging about public transit? I sure can’t! It almost seems just like yesterday that I put together The Tampa Transit Utopia Discussion and began to express my feelings and thoughts about public transit in my region and beyond. So what exactly have I done in these past 10 years when it comes to blogging about transit? Well, let’s take a quick look.

Besides all of the blog posts and content pages that you’ve likely seen, I’ve taken a trip to Belgium & France, a trip to Norfolk & Virginia Beach, two trips to New York City, & several trips to Orlando. I’ve also been able to decrease my dependency on a car and take transit much more often than I used to, which allows me to take stress off my aging and increasingly unreliable car. In addition, I’ve been able to utilize a variety of transit modes – including local & express bus, shuttle & flex van, light rail, commuter rail, monorail, funicular, and subway.

You can see in the collage above just some of the buses and trains that I’ve had an opportunity to ride on or at least photograph. I’ve enjoyed many combined rides on board Hillsborough Area Regional Transit (HART), the Pinellas Suncoast Transit Authority (PSTA), Sarasota County Area Transit (SCAT), Manatee County Area Transit (MCAT), Pasco County Public Transportation (PCPT), SunRail, LYNX, Votran, StarMetro, Hampton Roads Transit (HRT), and many others.

So what is my favorite transit system? Well, that’s a tough one. I would say PSTA is my favorite, with the New York City MTA being a very close second. PSTA is my favorite not only because it’s my home system, but because they’ve been able to make a lot of improvements over the past 10 years – despite the failure of the 2014 Greenlight Pinellas sales tax referendum. The MTA is my second favorite because I was able to get to so many destinations in the New York City region without having to jump into a car – all despite the hardships that commuters face each day on the buses & subway trains.

While HART will always have a place in my heart, I feel that local government is neglecting transportation in Hillsborough County to a point where it’s almost unbearable to use transit there, & it’s really sad that it’s come to this point. When you have too many people who think that transit is only for the poor & disabled & thus don’t think it’s worth it to fund the system unless you’re able to leverage blowing tons of money into interstate highway widening with nonsense toll lanes, it’s really sickening to be honest. Transportation should not be a partisan political football – period, and for that reason, I’ve been able to gradually increase my transit advocacy – including through my No Tax For Tracks Truth Page Presents – Away with Tampa Bay Next Facebook Page.

So what will the next 10 years bring? Well, more transit photos, videos, stories, and other content, as well as more involvement in transit advocacy. I also hope to be able to embark on a few more travels – including round 2 in Europe, round 3 in Tallahassee, round 4 in New York City, as well as possible trips to Miami, Jacksonville, & San Francisco. I also fully intend to keep my site around for at least another 10 years & am trying my best to execute an expansion that I’ve been planning for the past several months. My day job has been quite busy as of late, so it hasn’t allowed me to do as much updating as I would like.

Before I close out this post, I want to say thank you to all of my visitors & group members, as well as all those who have provided support & contributions to my site over the past 10 years. I also want to thank the many members, moderators, & administrators at SkyScraperCity for giving me inspiration to launch what is now The Global Transit Guidebook, & for continuing to support my endeavors along the way! Without your support, I would not be able to do what I do today. Thank you!