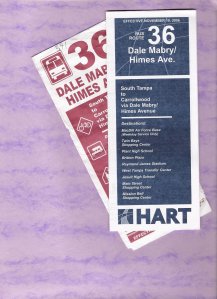 I’m currently trying to compose at least a brief summary of how HART and PSTA came about. Fortunately for me, I didn’t have to look too far to find out some neat facts about PSTA, as they have a history section on their website. Below is a synopsis of PSTA’s history, in my own words, as I used it for improving the PSTA article on Wikipedia.

PSTA began in the early 1900s as the St. Petersburg Municipal Transit System (SPMTS). The system began with a streetcar line to Gulfport and eight buses to run several routes throughout the St. Pete area. By 1928, ridership on the system hits 4.2 million. In 1949, the Gulfport streetcar system is closed, marking the end of streetcar service in Pinellas County. Meanwhile, transit service elsewhere continued to expand.

In 1970, The Central Pinellas Transit Authority (CPTA) is formed, serving the Clearwater area and northern Pinellas. The agency is fully established by 1973 and operated 9 routes with a fleet of 21 buses. The CPTA saw 900,000 riders in its first year of service. In 1975, SPMTS begins paratransit services and both agencies continue to expand their fleet. In 1978, tourist trolley service (using trolley-replica buses) begins in downtown St. Petersburg and becomes successful. By the 1980s, the two agencies have formed a cooperative agreement, which allowed the expansion of routes throughout Pinellas County.

t (HART). This service has been immensly improved since the acquisition. Also in 1990, PSTA established a cross-county bus route via US 19.

Massive expansion and improvements take place during the 1990s and well into the 2000s. PSTA constructed its Williams Park terminal in downtown St. Pete in 1994. In 1996, the agency introduces electronic fare cards (called GO Cards) and begins replacing their outdated bus fleets with a combination of New Flyer and Gillig buses. In 2001, the Suncoast Beach Trolley begins service along the gulf coast beaches and in 2003, PSTA purchased a fleet of motorcoach buses (from Motor Coach Industries) to operate its express routes. Additional capital improvements are made during the early 2000s as well, including the renovation of the Park Street Terminal. In 2001, PSTA.net debuts.

In 2004, HART and PSTA begin an intersystem passport to allow patrons from either county to use each other’s bus systems without paying additional fares. A year later, PSTA’s current operations center opens near Roosevelt Blvd. In 2006, PSTA expanded its fleet with the purchase 48 Gillig low-floor buses. HART & PSTA agree to honor each other’s reduced fare photo permits. In 2007, Executive Director Roger Sweeney retires. He is succeeded by Tim Garling. That same year, PSTA introduces a online trip planning system. This system allowed patrons to better plan out their trip throughout the PSTA system. In 2009, the interface was scrapped in favor of a partnership with Google, which HART began partnership back in 2007. This newest alliance allows patrons to seamlessly plan their trips on both the PSTA and HART systems.

Today, PSTA operates 36 routes and has a fleet of over 200 buses, which consist of New Flyer, Optima, Gillig, and MCI buses. Just recently, they purchased a fleet of Gillig BRT Hybrid buses in order to contribute to a cleaner environment.

Finding out more information about HART is just a bit more difficult, since they do not have such a fact page on their site. However, I do feel that this will change for the better down the road. In the meantime, I will try to update this post further before the middle of August, so stay tuned…